Electronic Indie Pop artists from L.A. are notoriously creative yet inconsistent. Sir Sly has done a lot to break this mold. I broke down most of their background on my review of their 2017 release Don’t You Worry, Honey. I’d recommend checking it out, not solely so I can get more clicks on that article, but also so I don’t have to do more writing here than I’d like.

The beginning of their trippy, electro noise journey is the song Gold and its proliferation on streaming apps. This minor success drove the trio to work harder and drop a full length album from the foundation of their debut EP. You Haunt Me came out September of 2014 on the tail end of the excitement surrounding tracks “Ghost” and “Gold”. 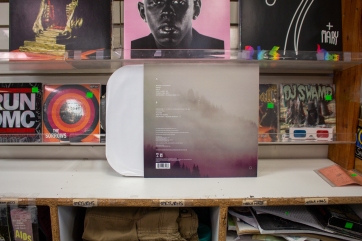 The album kicks off with three tracks from the group’s debut EP, “Where I’m Going”, “Ghost”, and of course “Gold”. These three tracks bould out the most interesting part of the album. Before the fourth track from the EP, the pace is interrupted by the title track “You Haunt Me”, a refreshing up tempo track with high-hung piano keys and a simple synth progression that carries the vocals. Behind the almost dream-pop instrumentals, Lead Singer Landon Jacobs introduces familiar themes of a toxic relationship he can’t let go of. This person haunts them, but they refuse to let go.

The pair of tracks “Nowhere / Bloodlines Pt. I” and “Helpless / Bloodlines Pt. II” tell a sort of story within a story. The narrative in these tracks feels separate from the one told by the rest of the album. Part one and two are separated by four tracks that continue instrumental themes but don’t address the storyline.

“Inferno” includes guest vocals from Lizzy Plapinger. This track stands out to me for its use of plucking strings as well as one of the more aggressive hooks. Plapinger’s vocals add a healthy contrast, but her lyrics don’t add anything memorable.

Quickly, I’d like to touch on the track “Leave You”, which adds more context to the story. Here he speaks to his dream coming true in a way he didn’t see coming, leaving the relationship. Other than this hook, nothing stands out here, and this track falls into the void of my ears. “Flood” does something similar, illustrating the loss as a death.

After the storyline’s crescendo in “Too Far Gone”, we finally get resolution with Part two of the Bloodlines tracks. “Helpless / Bloodlines Pt. II” wrpas up our story by bringing us back from the brink of all loss and has us sit and think about what loss really means. He asks, “what do I do… if I lose you. I feel Helpless.” The music is equally unsettling and reassuring in its unsettledness.

The closer, “Witches” doesn’t fit too well, but does provide room for the album to close, and that is an important task that shouldn’t be overlooked. From top to bottom, I don’t think this album knows what it wants to be or do. It tells one story from too many points ant too many parallel realities.

I can say that I am happy to have this in my collection. The clear vinyl is smokey and looks pretty while spinning. The consistent sound and formulaic tracks make it good for putting on while working on other tasks than listening.